Imagination rules the world – NOT! 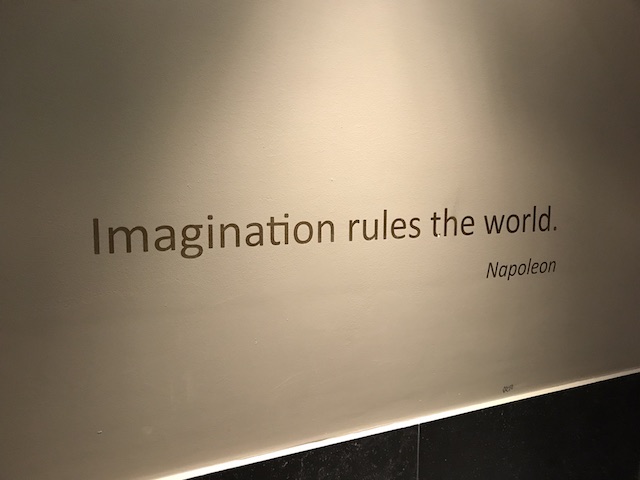 I recently stayed at your Amsterdam Hotel for three nights – don’t worry, I don’t have a complaint, everything was nice and good. There’s just a tiny detail I want to mention.

In the restrooms in the lobby there are „inspiring“ quotes on the wall. I don’t know what it says in the ladies toilet – well I should know, because my girlfriend told me – but in the men’s there is a saying by Napoleon:

No, it doesn’t. Actually, imagination is essential for not feeling the urge to rule the world. And Napoleon was a stupid asshole, who killed people and wore a stupid hat. I don’t think there is anything inspiring about quotes by people who made a living conquering countries and going to war. War is ugly. Imagination is beautiful.

On the other hand, do you know what the people are doing, while they are reading that quote? Doesn’t need a lot of imagination…

And to be serious for a second, here’s what Napoleon wrote leading up to that quote:

„What a thing is imagination! Here are men who don’t know me, who have never seen me, but who only knew of me, and they are moved by my presence, they would do anything for me! And this same incident arises in all centuries and in all countries! Such is fanaticism! Yes, imagination rules the world.„