Comedian speaks about Islam – gets sued! 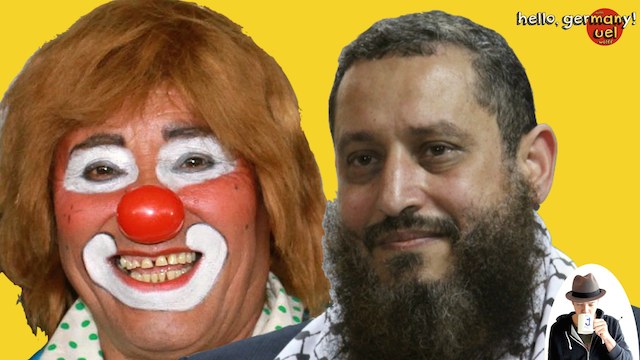 Something strange happened in germany, freedom of speech doesn’t seem to be right for everybody:
(transcript below)

People around the world! Something strange happened this weekend in Germany, and I’m here to tell you about it, because you probably haven’t heard what happened. So, a colleague of mine got sued. When I say colleague, I mean a fellow comedian, I don’t know him personally and he probably doesn’t even know I exist. He’s one of the most famous comedians in Germany and his name is Dieter Nuhr.

Let me take you through what happened. Now I don’t know exactly what he said, or if what he says is any good or not, I can’t judge, because he has this really beautiful soothing voice, so whenever I watch a video of him, I fall asleep immediately. Let me use a lame joke to explain: While some comedians would go like this:

„Have you ever wondered, isn’t it amazing, i really, really don’t know, you tell me, in the jungle, Tarzan – why doesn’t he have a beard?“

Lame joke – but would keep you awake, Dieter Nuhr would rather go like this:

„I wonder why Tarzan … doesn’t have a beard. That’s strange, isn’t it.“

So but what basically happened, Dieter Nuhr made a few cracks, jokes, directed at Islam and about what it says in the Koran. And one guy was offended, his name is Erhat Toka, so what he did, was sue.

Which I find an extremely german thing to do. You don’t like what another person says, so you sue. I can’t think of anything more german. That’s an example for integration working extremely well.

So but regardless of what Dieter Nuhr said, wether it was funny or not, true or false, out of love or hateful, how come another guy can sue? „Don’t you have freedom of speech in Germany?“ you might ask. Well yes, we do, and that’s why the case won’t stand in court, but there’s this little other thing, the criminal code section 166. It’s called „Beschimpfung von Bekenntnissen, Religionsgesellschaften und Weltanschauungsvereinigungen.“ In english: „Insulting of faith, religious societies and organizations dedicated to a philosophy of life.“

Oh well. Bummer. Now this law comes from the year 1872, and there have been several attempts to abolish it, but they failed. Now let’s think about it, it wasn’t Muslims who brought this law to Germany, because they feared someone might say something bad about their religion. No, of course not. It was christians. It’s not only muslims always being the bad guys. Remember, the catholic church wanted to ban „life of Brian“, and that wasn’t a single idiot going to court, that was a whole organization. not to many muslims around in 1872, bites you in the ass, doesn’t it.

Now of course, this paragraph has to go, it is absolutely essential that a comedian, an artist, anybody can say anything they want on stage, without having to fear needing to justify himself in court. That’s just ludicrous. Freedom of speech also means the freedom to say something stupid. Or smart. Or whatever.

But what’s interesting: after the news of Erhat small penis Toka suing came out, the reactions of some people disagreeing with little Erhat, they of course started putting this one persons action in context to islam, and so it wasn’t far until anti-islamic comments turned up everywhere in the social web. And that’s the problem from the start. There’s one guy, who calls himself a faithful muslim, he does something extremely stupid, and in your mind suddenly muslims do something extremely stupid. Which is the same error Dieter Nuhr does, because he says „arabs“ and „muslims“ and not „some muslims“ or „some arabs“. Which is stupid and idiotic, but he has every right to do so.

But above all, what I find strange with any religious nutcase, no matter from which religion, who feels the need to take action against anybody saying something against your religion: Is your god really so weak, that he can’t handle things without your help? Why do you treat your god as if he is a sick child that can’t survive without you being the overprotective mother? What’s wrong with you? Shrug your shoulders and know that your god will take of it himself, because he’s almighty. Or maybe he isn’t. Is that your fear? Are you reacting that way, because deep down somewhere you have doubt, your common sense is setting in and you are asking yourself maybe there is no god? And you don’t want that, do you? And that makes you angry? So you have to take action, because your god doesn’t take action, because he is way to cool and wise to deal with that crap? Well take his example and relax, peace.

So, what do you think of this whole situation? I’d love to hear from you in the comments – no matter what faith you are. But please stay civil.

That’s it, see you next time, Manuel off.

This is from the Youtube channel „hello, germany!“ – also worth a visit.