Friendly Muslims – are they funny? 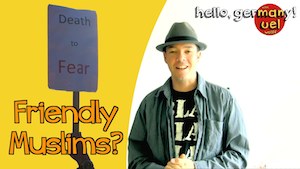 Once again a new episode of the „hello, germany!“ vlog and this time I’m wondering about how a joke works. Because while performing in London, England, I got threee different reactions for the same joke on three different nights… and I don’t know, why? Watch the video and see why the mere mention of „a bunch of friendly muslims“ makes some people feel uncomfortable. I don’t get it:

This vlog episode is from my youtube channel „hello, germany!“, check it out, leave a comment and a subsciption to get the videos first!