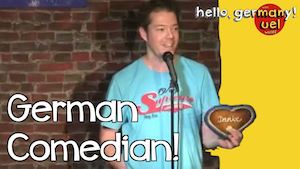 Hello people from earth! I’ve been doing stand up in English for a couple of years now and am leaving my lovely town of Cologne for a nice week of English performances in Maastricht, Paris and London tomorrow, so I thought it would be nice to take a look back at the very first performance I did in English:

This is from „Hollywood’s Comedy Night“, a monthly English comedy show created and hosted by american Comedian Johnny Hollywood in Cologne, Germany, where he invites british & american comedians to perform for expats living in Cologne.