from my performance at the international comedy night in Maastricht, Netherlands: 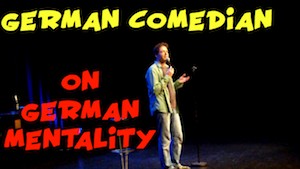 „What kind of silly idea is that, to make an english comedy show in the Netherlands and then bring a german onstage? We’re not funny at all! I mean of all the nations in the world – Germany is the least funny nation! We’re even less funny than North Korea! Geez. No, but seriously, we’re not funny people, we’re angry people, we don’t have joy. We take – stuff!

You know, I had a friend in Holland, I was visiting him and I asked „You don’t mind if germans come?“ and he said „Well, we don’t mind, we welcome them, but only one at a time.“ – So here I am.

And it’s not true, nothing was better „früher“, everything gets better all the time! We should be thankful and happy! We should be thankful for the americans like Johnny Hollywood – because the Americans they reunified Germany … by taking David Hasselhoff, putting him at the Berlin wall, standing on top of his speaking car – speaking not singing car – but he was singing „I’ve been looking for freedom!“ and the wall came tumbling down. We should be so happy! Hallelujah, David Hasselhoff!

I know David Hasselhoff is not really from the USA, he’s Canadian. So? Hitler was austrian.